YOU ARE HERE HOME ANITA DONGRE 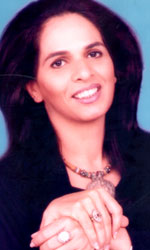 Sensitive to all things creative and linked to fashion design; Anita was thrust towards the world of fashion immediately after schooling. Although the initial years of University were geared towards a Commerce degree, she simultaneously enrolled into the prestigious Indian fashion design school S. N. D. T. and completed the course with flying colours in 1983. Wanting to give back to her Alma Mater, she began teaching at SNDT and continued to do so for 2 years. Anita Dongre has been a part of the fashion industry for the past 15 years. Armed with a degree in fashion design from SNDT. Anita shot into the limelight in 1999 when she decided to enter the branded market with her western wear prêt line for women. The AND label, consists of comfortable, stylish and affordable western wear priced to appeal to the working women. The brand's popularity can be attributed to the price and design sensitivity that Anita has managed to hit upon with utmost clarity. Today Anita Dongre has the unique distinction of designing and selling ensembles. AND, retails from one of India's premier mall Crossroads and linking Road and a Franchise in Bangalore. AND also retails from all Lifestyle and Pantaloon Stores and soon to be launched at select Shopper Stop outlets. Subsequent to the popularity of AND, Anita launched a line of Fusion Wear under the label AND EAST. The brand consists of Indian Ethnic Wear with international contemporary Silhouettes. AND EAST is available at the AND stores at Linking Road and Bangalore. It also sells from Shoppers Stop, Lifestyle and Pantaloon Stores. Anita's couture label ‘ANITA DONGRE’ was launched in August 2000 at the CPD Dusseldorf, garment fair in Germany. Anita was the first Indian designer invited and honored to showcase her collection in the final of the CPD Fashion show. The ‘ANITA DONGRE’ label sells from her store at Om Chambers, Kemps Corner and is a fitting combination of the exemplary world of Indian creative crafts with a line that is known for its clean cuts and simplistic value. True to the couture culture, the garments at the store are limited editions and is in keeping with the loyal client requirements. Anita also does a special prêt line for the West side chain of stores. Consistency in design values and a growing appeal within the fashion conscious is not all the Anita has achieved. She made a soft and impressionable entry into the world of beauty pageants. In 2001, Anita provided the casual wardrobe for all the Femina Miss India contestants and designed the pageant gown and the eveningwear wardrobe for Shamita Singha representing India at the Miss Earth Contest. She also designed formal wear for Kanwal Toor who represented India at the Miss International contest in 2001. Optimizing the capacity of the manufacturing facilities is priority for the sharp business acumen that Anita Dongre possesses. She has successfully designed and manufactured uniforms for leading national corporates. These include reputed companies like Lakme, BPL, Sunsilk, Calvin Klein, Sahara and Dhirubhai Ambani International School. With just three years of being in the public eye, Anita Dongre has strategically carved a niche for herself and is a name to reckon with.