YOU ARE HERE HOME ARAIYA BY AALIYA AND ARSHIYA FAKIH 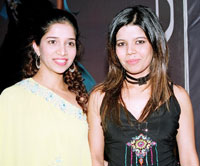 Araiya’s reputation is built upon its vibrant styles, colors, fabrics & innovative ensembles, Its foundation centered on its sensitive attentiveness to detail Its philosophy draws inspiration from individual clients: To create signature apparel reflecting its wearer’s Unique personality. The Label Araiya’s reputation is about its dazzling arrays of fashion apparel for … just about every woman … the daring, the dynamic, the dignified, the discerning, – and yes – the downright difficult! The label is the shared inspiration and aspiration of sisters Aaliya and Arshiya, who worked together and apart to build upon their prized project. Araiya was formally launched in Bombay on November 06 1998 and almost immediately, within weeks of its launch, its founder duo were among the acknowledged hot and happening ‘top twenty newsmakers’ (Midday, December 1998) as well as becoming the designers of choice for countless celebrities and luminaries.

The overwhelming response accorded Araiya’s fashion statements prompted the setting up of three outlets in Bombay and numerous showings of its collections. It also compelled the next logical step - the launching of the sisters’ bridge line – I.Y.A – a collection of practical, affordable styles available in most of the top outlets in Mumbai, Delhi and Chennai.

The company designs and produces garments for ad campaigns, special promotions, TV serials and celebrity events and, with a current production capacity for 10,000 pieces per month, it designs and produces garments for established brands such as Provogue and Oobe. Add showings abroad and the design and production of exports to Saudi Arabia, Fiji Islands, South Africa, London and New York and you gain a glimpse into the animated, nonstop activity in and around Araiya. Even so, the sisters manage time for several appearances on BBC’s Style as well as on Star, FTV, MTV, Channel V, Zee, and others. A fashion column for Bombay Times merely punctuates a moment’s lull in a driven schedule with more in the works.

There are firm plans to launch outlets in Dubai, London and New York and with 2003 witnessing Aaliya based in London and Arshiya based in Dubai, these plans are all set to design, delight and deliver… The Creative Complement Aaliya and Arshiya come from a business family that has made significant contributions to the garment industry in India. Its various concerns, in operation for almost 25 years, include Naseem Creations and Culture India. After graduating from the Sydenham College of Commerce & Economics, the sisters took separate routes to perfect the special, individual talents that would result in the creation of Araiya. Arshiya, led by her creative nature, topped the Dean’s Merit List and won a scholarship for extended studies. She headed to the National Institute of Fashion Technology (NIFT – Bombay) and then to the Fashion Institute of Technology (FIT – New York) when she received the Presidential Scholarship Award. She earned her degree in Fashion Designing, specializing in knitwear, and graduated with Cum Laude honors. Before returning to India, Arshiya interned with designers such as Ralph Lauren and Onyx Noire while holding a full time work position with designer Neil Beiff.
Aaliya, following her genius for management and production, completed her diploma in Garment Manufacturing Technology at the NIFT, Bombay and topped her class as the “Most Outstanding Student”, an award she received at the hands of then Indian President K.R.Narayanan. She then joined Arshiya at the FIT in New York to study advanced courses in Production Management. Subsequently, she went on to work for California Concepts, an export house in New York, before coming home to India and the beginning of Araiya. A few of Araiya's celebrity clients include Aditi Govitrikar, Helen Brodie, Lisa Ray, Malaika Arora, Nafeesa Joseph Ali, Namrata Barua, Reshma Bombaywalla, Sushma Reddy, Yanna Gupta.