YOU ARE HERE HOME ANJANA BHARGAV 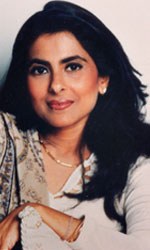 With a formal degree in Textile Designing and pattern cutting with a French Instructor, combined with an inherent sense of aesthetics, Anjana established Studio A, a design studio in New Delhi. She launched her first collection at a fashion show in 1994 with Bina Ramani, one of India's leading designers and pioneer of the Indian fashion industry. This was soon followed by a solo fashion show An Indian Summer, which was held at the prestigious UNESCO Hall in Paris. Since then, Anjana has had several showings in Sharjah, London, Kathmandu, New York and Germany, along with showings of her collections in Delhi.

Anjana was recommended by the Ministry of External Affairs to represent 'Women Entrepreneurs' at the OECD Conference held in Paris in the year 2000, where over 300 women entrepreneurs across the globe shared their experiences.

Anjana designed and fabricated jackets for the prestigious PATA Conference for Delhi Tourism held in April' 2002 in New Delhi.

Anjana has also made a mark in the corporate sector by designing and fabricating uniforms for Hotel Grand Intercontinental, New Delhi and the ITC Group of hotels across the country.