YOU ARE HERE HOME APARNA AND NORDEN 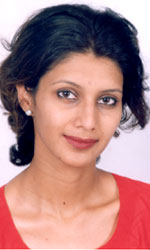 I graduated from NIFT, Delhi in 1997 after studying three years of fashion. The graduating collection based on the Buddhist Thangka paintings, was one of the sixteen collections chosen from Britain and India to be presented in the ‘Indo-British Partnership towards 2000’. After graduating I have worked on product design, computers aided design and have done two textile weaving projects in Kullu along with various freelance projects. I have also worked in costume designing, having worked with one of the leading theatre directors in two plays. I did the costumes for a musical play as well as for the Indo French Cultural meet in June 2000. Recently I did the costumes for the Indo French Opera by Muzaffar Ali staged on March 1st and 2nd, 2002. I did a research and documentation project of the Kullu Shawls weaves in Himachal Pradesh with the Textile Ministry in the first half of 1998. During this I explored the transition of the Kullu motif to its contemporary form, in an intensive research process as it traveled through Tibet, Ladakh, Kashmir Kinnaur and into its final modification. On the completion of the research project, I did a design project in Kullu with a society in which I had to design, develop, and get woven twenty five samples of shawls keeping intact their characteristic methods of weaving but doing completely new designs. This involved working closely with the weavers. I started FREEFALLING, my design studio in April 1999. The silhouettes are basically western but the look is indo-western. The color stories, fabrics and the embroidery details are Indian in their interpretation. Color to me is the very essence of expression. What one wears, be it clothes and accessories, what one owns, Color is the most visual form of self expression. The main focus in freefalling garments is color blocking. Bold colors are juxtaposed in a graphic style. The clothes allow the freedom of self expression in that they can be worn as separates or combined in various ways to suit the attitude of the wearer. Depending on how one combines the look can be very bold or can be more subdued. Freefalling clothes are supplied to Ensemble. Bombay, Ogaan. New Delhi, Grasshopper and Ffloio in Banglore, Melange. Bombay, Earthy mysts in Calcutta, Sharan Apparao in Chennai and Taj Khazana. I was one of the six designers for a NASSCOM show in march 2000 in Bombay, which was presenting six new designers in the industry. I exhibited my garments in the fair at the Australian Embassy in March 2000.